Thousands of Fans Can't be Wrong

Wednesday, the 29th of July, was Geddy Lee's birthday. If you're not a fan of the rock band Rush, you may not know who Geddy Lee is (he is Rush's lead singer, and an excellent bass player too), and you may wonder why I'm devoting a blog post to him. Suffice it to say he means a lot to me (I've known him for more than four decades, and consider him a friend). He also means a lot to the band's world-wide community of fans, large numbers of whom have admired his work for as many years as I have. Rush are no longer performing-- they announced their retirement in 2015, and in early 2020, the band's drummer, Neil Peart, lost his battle with cancer. But for the fans, Rush's music lives on; and all of us celebrate their birthdays, as well as remembering the concerts we attended over the years. 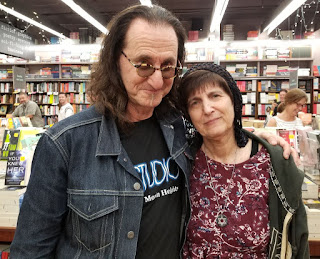 So, when Geddy had his birthday, I posted several photos on social media-- including this photo, which  was taken on a Thursday night, 18 July 2019, at the Brookline (MA) Booksmith, where Geddy was signing copies of his new book, "Geddy Lee's Big Beautiful Book of Bass."  (For those who haven't seen photos in my blog posts before, Blogger, which publishes my blog, now makes inserting photographs much easier, allowing me to add them into my posts.  Given how knowing Rush changed my life, it seems fitting that my first attempt to publish a photo is one with a member of the band.)

More than 1500 fans commented on my post, wishing Geddy a happy birthday (I passed along those wishes through his sister, with whom I've become friendly...another benefit of knowing Geddy), and offering their recollections of times they met him or times they saw him perform.  A common thread, whether on Facebook, Twitter, or Instagram, was what a kind and humble person he is.  Rock stars are often stereotyped as arrogant, egocentric, or vain, but Geddy is none of these. He is as down-to-earth now as he was when his career was just beginning.

Geddy is also a philanthropist, and he's a devoted family man. And yes, he's also good to his mother! He loves music, but he also loves baseball, especially the Toronto Blue Jays; and he is a collector of memorabilia related to the game. (Combining his love for philanthropy with his love for baseball, in 2008, he donated over 200 autographed baseballs, signed by Negro Leagues players, to Kansas City's Negro Leagues Baseball Museum.)

But about the photo-- the book-signing event got off to a late start because Geddy's plane was delayed. Fans patiently stood in long lines to see him, even briefly. I didn't want to bother him, given all the people eagerly wanting to say hi and get an autographed copy of his book; but when he saw me standing off to one side, he stopped what he was doing and asked everyone to wait. We hugged (this was last year, pre-pandemic), chatted very briefly, and then I asked if we could get a picture, since we hadn't seen each other in a while. Someone from the Booksmith staff kindly took the photo, and I am grateful that I could add it to my collection.

For those who don't know much about Geddy, what I find unique about him (and his band-mates) is how appreciative they have always been for what I did for them. I am known for launching their career in the US, and I always stood up for them when media critics were scornful towards them; I advocated for their star on the Hollywood Walk of Fame, and I was there to give a speech in June 2010 when they received it.  And they never forgot it. And they always showed their gratitude, even years later. 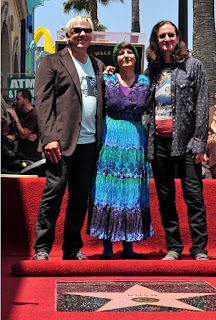 My point is not that I'm such a wonderful person-- my point is that as a music director and a deejay, I helped many rock stars during my years in radio, and seldom got so much as a thank-you; in fact, I seldom heard back from any of them. But Rush always kept in touch. If they could mention me during an interview, they always did. They didn't have to. Yet they still did it. And my experience is not unique: many fans have stories of how courteous and thoughtful these guys always were. Many fans have positive recollections of meeting them, even for a brief moment at a "meet-and-greet" event.

I hope Geddy's birthday was a happy one (he spent it with his family, I am told). And I'm glad my post brought back some positive memories for the fans. In this crazy world, with a pandemic, political divisions, economic problems, and general insecurity, it's comforting to share some good music, and to keep in mind that there are still people out there who haven't changed-- they are still the same good people they always were. I don't know about you, but I find that both refreshing and encouraging.
Posted by Donna Halper at 10:02 PM 17 comments:

All The Small Things

A couple of days ago, I lost track of what day it was.  No, there's nothing wrong with me (not as far as I know!), but my experience is a common one, it turns out. I heard a commentator on TV remark that during the pandemic, every day is "Blursday," since the ways many of us mark each new day-- our routines, like going to the office or visiting friends or attending a worship service or taking a trip-- have all been disrupted. When you've been spending long hours at home, even under the best of circumstances, the days begin to have a certain sameness to them, and Monday feels like Wednesday, which feels like Friday.

I've tried to make the best of it. When we were in the midst of strict stay-at-home orders in Massachusetts, I made sure I got dressed for business every day, and I tried to schedule Zoom calls with students or colleagues, just to stay busy and to keep my communication skills current. But it didn't always help. Seeing folks on a tiny screen (or even a bigger one) isn't the same as being with them in person. I found myself missing the ability to give someone a hug, or shake their hand. It's probably my imagination, but I don't feel as alert or as sharp as I did four months ago. And based on what I've been reading from other folks, I'm not the only one who feels this way.

In Massachusetts, we have a very cautious governor who instituted rules and steps; and nearly everyone followed them. Mask wearing was not a political issue-- most of us understood the reason for it, and even now, four months later, if you go into most stores, you'll see that 99% of people wear a mask.  (Some of us are trying to have fun with it: I often color-coordinate my masks with what I'm wearing, and I've also seen specially-made masks for sports fans, fans of certain rock bands, etc.  The other day, I was online and noticed about fifteen pages of craftspeople who custom-design masks... one of them is a cousin of mine, and she does an amazing job. I hope she's getting lots of customers!)

Because our COVID-19 numbers have continued to decline, restrictions are gradually being lifted. This past Sunday, for the first time in nearly four months, I was able to visit Jeff, the autistic young man I've known and advocated for since 1984. It was the longest we'd ever been apart, and I worried that he might forget about me. But in his mind, the four months never happened. The moment he saw me, it was like everything was fine again.  He was smiling, ready to get in my car and go out to find some lunch (not everything has opened back up yet). He was convinced that the routine he missed so much must be back in place again. He doesn't quite understand why we couldn't see each other, and he doesn't quite understand why he can't go back to work yet, but getting together with me was a sign that normal daily life must be returning, and it made him happy.

Of course, daily life is not normal yet. I don't know when it will be. But the past four months have given me a renewed appreciation for the little things in life-- like reading a good book, or enjoying a favorite music video, or watching the flowers blooming in our garden... or finally being able to visit a friend. There's a part of me that misses going in to work, but I haven't missed sitting in traffic! (However, I have missed visiting libraries and museums. Glad they are opening back up!) Most of all, I'll be glad when I can get back to a regular schedule again-- there's something to be said for knowing what day it is, and knowing there's somewhere I'm supposed to be.
Posted by Donna Halper at 9:23 PM No comments: