A warning before I begin: this may be the strangest blog post I've ever written. It's not about politics, or sports, or rock and roll. It's about... pigeons.  It all started the other day.  I was taking a break from working on my syllabi for the upcoming semester, and I came downstairs to the living room. As I looking out the window at the bird feeder (lots of sparrows, grackles, a cardinal or two, and the occasional woodpecker), something caught my eye-- a single multi-colored pigeon on the lawn.

Now, I'm sure I am not alone in saying I'm not fond of pigeons. Yes, they're intelligent, and they mate for life, but they also tend to make a mess wherever they go; and if you feed one of them, suddenly you have twenty more wanting to be fed. Pigeons on the lawn aren't unusual-- they come in to get the seeds that fall to the ground.  But this pigeon was behaving oddly. It wasn't eating or walking the way pigeons usually do. In fact, it was walking as if it couldn't balance. When I looked more closely, it was obvious why-- one of the pigeon's wings was broken.

At some point, the pigeon vanished, and I didn't think any more about it, but the next day, there it was again and it didn't look any better. But when it went out near the seeds on the ground, two larger pigeons attacked it. I had never seen this before: I had witnessed males pecking each other as they tried to show dominance, but this was two pigeons jumping on the wounded pigeon and knocking it over. And they left it there, on its back, unable to right itself.

I wasn't sure what to do, but watching it struggle, I knew I couldn't just leave it like that, so I turned it right-side up. It slowly walked under the porch, and there it stayed, as if it knew that was a safe place. Every now and then, it comes out from under the porch, but it can't walk very well yet. So, my husband and I have put a little bowl of water and a little bowl of birdseed nearby. This morning, the pigeon looked a little better. I have no idea if it will recover, but somehow, I felt I ought to make it comfortable, for however long it has left.

Maybe that seems silly, but I guess it really bothered me to see those two pigeons bullying the injured bird and leaving it to die. Okay fine, in nature, those things happen. But it still didn't feel right to just do nothing. My hope is the bird will recover, although I don't know if its wing will heal up. For now, it seems comfortable, safe from predators (and bullies). Meanwhile, I wonder if my husband and I did the right thing.  I know some websites say that when you see an injured animal, you should just leave it there, and a few others say to rescue it. I don't particularly want a pet pigeon, thanks, but I do want to see this one have a chance to live.

Because I'm a teacher of ethics, I keep thinking that we shouldn't just show compassion to other humans; we should show compassion to animals too. And while this may seem like a small, and possibly silly incident, not worthy of a blog post, I've been thinking about it for several days now, as I watch the pigeon seeming to improve. Is what I did compassionate, or was it foolish? You tell me.
Posted by Donna Halper at 9:13 PM 4 comments:

100 years ago, women in America finally got the right to vote. Some states and territories, mostly out west, had given women the vote as far back as 1869 (Wyoming was the first); but it took until 1920 for all women to gain what was then called "suffrage." In commemoration of that achievement, my local newspaper, the Quincy (MA) Patriot-Ledger, was among the many to provide a list of groundbreaking women, many of whom are nationally famous.  But I was genuinely surprised when one of the editors let me know I would be including in a list of noteworthy women from the South Shore, the part of Massachusetts south of Boston (where I live). I've never thought of myself as noteworthy or historic, and yet, there I was on the list, celebrated not just for discovering the rock band Rush but for being a media historian, an author, and a trailblazer for women in radio. https://www.patriotledger.com/entertainmentlife/20200815/their-legacy-marches-on-celebrate-women-of-century-with-look-at-historic-south-shore-figures?fbclid=IwAR12bPZKxemEcC90wEcb-bJSTYa23q07ySkfSqK9vJgjV068vDU1SgV2Ppk

But nothing happens by accident. While we'd all like to think of ourselves as totally self-sufficient and independent, the truth is we all get by with a little help from our friends. In fact, very few of us have managed to achieve much without having role models. In some cases, our role models are people we actually know; they may not be famous, but they were there to give us good advice when we needed it.  In other cases, our role models are people we never met, but we feel like we know them, because their stories have inspired us. Over the years, whenever I've felt discouraged, I've found that having the right role models has been very helpful. So, I'd like to introduce you to four of the women who have influenced my life.

First, as you might expect, there's my mother. Here is a photo of her taken in 1944. She had married my father in 1942 and not long after, he was sent overseas to fight in World War II. I've always thought my mother was very attractive, and I always admired how beautifully she spoke: she was self-taught, having grown up in an era when women weren't encouraged to go to college. She loved to read, and she followed current events closely.  When I was growing up, she and I would often discuss what was going on in the world; it made me feel very grown up to do that. She taught me the importance of getting a good education, and she also taught me the importance of caring about others, rather than just making everything about yourself.  We didn't always see eye to eye (she couldn't understand why I wanted to leave Boston to pursue a career in broadcasting, for example), but she was one of the most spiritual and kind people I ever met. 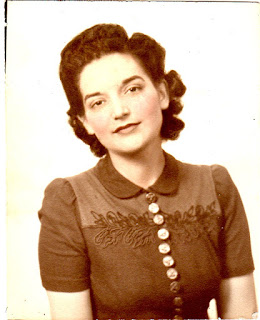 Second, there's Eunice Randall. This is a photo of her from 1921, and as you can guess, I never met her. I wish I had. She was perhaps the first woman radio announcer in the East, and she grew up in an era when the idea of a woman having a career was considered shocking. I am told it even cost her relationships, as some of her relatives were opposed to women going to "the big city" to get a job.  But, as the saying goes, nevertheless, she persisted: despite any opposition she encountered, Eunice became a ham radio operator, an announcer, a news reporter, and a radio singer. She could also build and repair radio equipment. She was only about 22 when this photo was taken. And because she was completely written out of media history, despite all her achievements, I made a promise to tell her story and get her written back in. I kept that promise. In fact, she is one of the reasons I became a media historian. 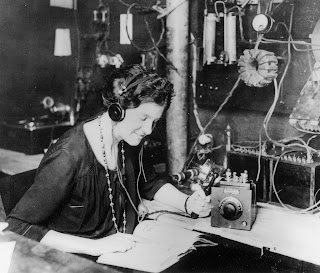 Third, there's Shirley Chisholm.  She was the first Black woman ever elected to congress. She ran for president in 1972, and I worked on her campaign (although I never had the opportunity to sit and talk with her, I did hear her speak--and she was a dynamic speaker).  Very few male reporters, and even fewer male politicians, took her seriously in that era; but even though she knew she wouldn't get the nomination, she never gave up and she never gave in. She was determined to be a voice for poor and working-class people, and the issues she spoke out about back then still resonate even today. 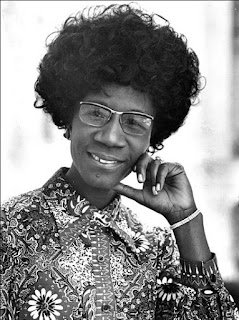 And finally, Rabbi Sally Priesand, the first female rabbi ever ordained by an American rabbinical seminary. I had the privilege of being in her congregation when I was living in New York in the mid-1970s, and she made quite an impression on me.  Frankly, I never understood why it was considered such a problem for women to want to be in the clergy, but I know that in some denominations, it's still forbidden even now. Back then, seeing her lead a congregation, and lead it so well, was very inspiring to me, at a time when gender roles were still being debated and what women could or could not do was still a topic of discussion. But she had known for a long time that she wanted to be a rabbi, and ultimately, she was able to attain that goal. 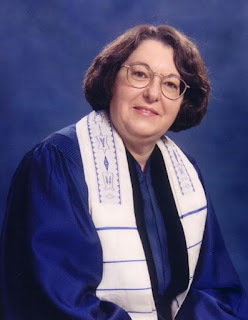 Throughout my life, I had people tell me I would never succeed, I couldn't possibly do X, I shouldn't even try to do Y. The women I admire most all share the common traits of being ethical and honorable; and they didn't let their surroundings, or their era, define who they were or what they could be. Some, like my mother, followed a more traditional path (but she never stopped trying to learn, and she never stopped trying to teach).  Others, like Rabbi Sally or Eunice Randall or Shirley Chisholm, carved out a path that few if any other women had walked. I'd be interested to know some of the women you admire, and why you admire them. As for me, I still can't believe there are people out there who think I'm inspirational too, but I'm told there are. And for that, I am very grateful.
Posted by Donna Halper at 9:05 PM 2 comments: