I can still recall where I was when I heard the news that Rush had finally been inducted into the Rock and Roll Hall of Fame. It was in mid-December 2012, and I was sitting in a Lesley University faculty meeting. I've told this story before, but it still stays with me. I never keep my phone on when I'm at work, so it was set to "vibrate" in the unlikely event that someone was looking for me (one of my doctors perhaps-- I had been having some health issues).  Suddenly, my phone began to vibrate...repeatedly, with phone calls and messages. I looked down at my news-feed, and that's how I learned the good news about Rush.

It really affected me: I mean, if you know anything about me, you know how long I had fought for Rush to be inducted. It seemed like such an injustice that they hadn't been. And now, at last, they were going to get the recognition they deserved. I got a lot of calls from radio and TV stations, wanting to interview me, asking how I felt. When I first heard the news, I got tears in my eyes-- tears of joy, because I was so happy that these three guys who mattered so much to me (and to the worldwide community of fans) would take their place in the Rock Hall. 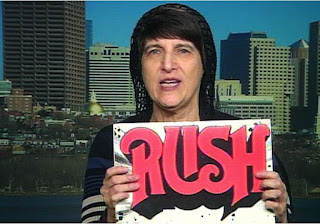 One station that interviewed me was CTV, and I was so happy that Pegi and the nice folks at Rush's management got to watch it. (In the screenshot from that appearance, the background is the Boston skyline; but in reality, I was in a studio in Newton, Massachusetts--about ten miles from Boston. When I did the interview, the producer superimposed the Boston skyline, as the morning team from CTV in Toronto chatted with me.) I talked about my role in getting the band's career going in the States; I talked about the millions of fans who loved this band, and wanted to see them inducted; and of course, I talked about how certain judges (including Jann Wenner himself) had disliked Rush and opposed their induction for years. But now, there were different judges, and finally, things had changed. I couldn't have been happier about it.

I didn't expect to be invited to the induction, which was out in Los Angeles that year. To be honest, I had no idea whether I'd be able to get out there, nor if there were any tickets left.  But Pegi called me to let me know the guys wanted me to attend, and she took care of my flight (which I appreciated-- they don't pay us professors the big bucks!); she also assured me I'd have tickets (and good seats).  And she made sure I was staying at the same hotel as Geddy's mom and sister, and all of us were able to hang out together.  THAT was very cool. I've been friendly with Pegi for many years, and it was wonderful to share the event with her. I also made some new friends: I am in touch with Geddy's sister to this day, and it was also such an honor to meet his mom, who was pleased that I could speak Yiddish. 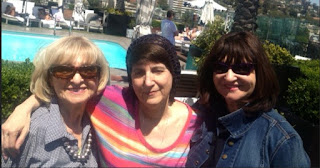 It seems like only yesterday, but it was eight years ago. I've told a lot of stories about that evening-- like how the capacity crowd seemed dominated by Rush fans, and when Jann Wenner came out to introduce the band, we all made sure we let him know how we felt about him. The booing lasted for what seemed like five minutes at least. He was a good sport about it, and he knew exactly why we were booing him.  And speaking of something that took a long time, I recall the long acceptance speech (it seemed like it lasted forever) that Quincy Jones gave. I'm firmly convinced that's what inspired Alex's legendary (and hilarious) "blah-blah-blah" speech. And it was an inspiration to see how many musicians, including the Foo Fighters, and Chuck D of Public Enemy, had words of praise for Rush-- and how many musicians expressed their admiration for Neil.  It was also wonderful to see how proud the band's friends and family members were. And the live performances... the jam session... to experience it in person was truly magical.

I met a lot of fans while I was in LA. For reasons I have never understood, some of them applauded me. I applauded them right back.  After all, when you are a fan of Rush, you are a member of an extended family.  I was glad that so many of the fans were there in person, to enjoy a moment we had all waited for. (Others got to see it later, when HBO broadcast it. I don't know about you, but I had fun reliving the evening; I watched it several times, in fact.)

Today, looking back on it, my only regret is that Neil is no longer with us. But it still makes me smile whenever I think back on that evening in Los Angeles, when Rush finally got the respect they had long deserved. The doubters said it would never happen; the folks who never liked Rush said it would never happen. But we who loved and believed in this band knew that sooner or later, it had to happen. And on 18 April 2013, it finally did.